Canadian Immigrants: Does your family have anything in common with Canada’s first prime minister?

Like millions of Canadians, John A. Macdonald was an immigrant to Canada. He was only five when his family moved from Glasgow, Scotland in 1820. But why did the Macdonalds emigrate?

Here are five reasons. How many of the millions of immigrants to Canada can say that they too came to Canada for similar reasons? 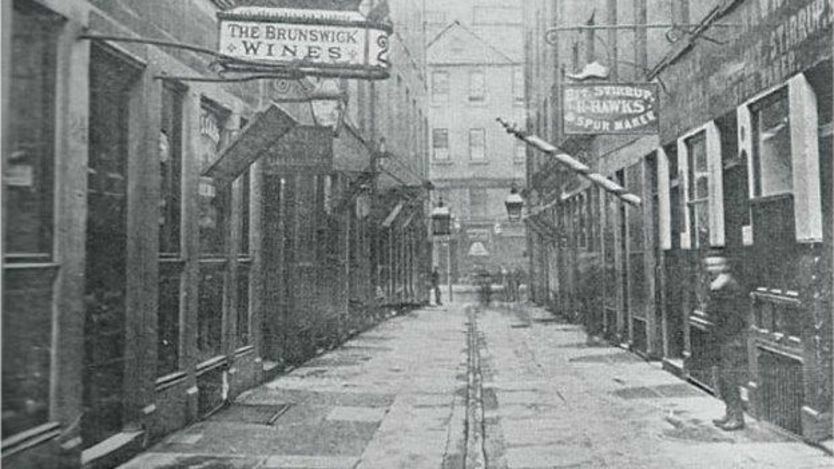 Brunswick Place in Glasgow, Home of the Macdonald Family (Courtesy Archives of Ontario)

The Napoleonic Wars (1803 – 1815) ended just five months after John A. Macdonald was born on January 11, 2015. These were major conflicts between the French Empire, led by Napoleon Bonaparte, and various European coalitions. Britain and France were locked in what seemed an endless war at the beginning of the nineteenth century. People were displaced. Families were torn apart. Jobs were difficult to find. The economy was in disarray. These military campaigns, however, came to an end in mid-1815 at the famous Battle of Waterloo when Napoleon finally surrendered to the Duke of Wellington.

But the end of the wars did not result in immediate prosperity in Britain. In fact, the war took a heavy toll on the people for the first few years after the conflict. Many Scots died in the wars. The ones who returned to their homeland found few employment opportunities waiting for them.

A second war began a few years before John A. Macdonald was born. The War of 1812 (1812 – 1815) was a North American war between the United States of America and Great Britain. It was no coincidence that this war started when Britain was preoccupied with the conflict in Europe. Britain and the United States were drawn into the war for a number of reasons including President James Madison and the Republicans Party’s clear interest in seizing the remaining British colonies in Canada before the Napoleonic conflict came to an end. Former President Thomas Jefferson famously remarked in 1812 that the “The acquisition of Canada this year, as far as the neighborhood of Quebec, will be a mere matter of marching, and will give us the experience for the attack on Halifax, the next and final expulsion of England from the American continent.” (Diplomatic History, Vol. 30, No.1, January 2015, pp. 70-97) U.S. troops advanced on Upper and Lower Canada in 1812. 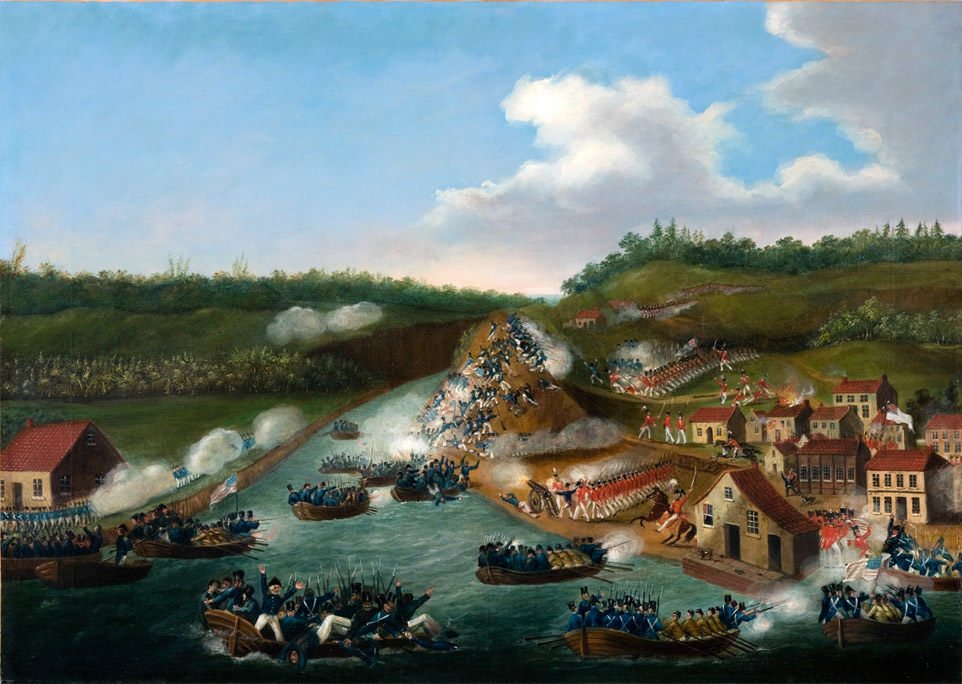 Britain had limited resources to fight in this war because of the war with France, but it managed to stave off the assaults for several years with well-trained but outnumbered British troops and a small militia comprised mainly of Loyalists from the former thirteen colonies. The United States wasn’t able to defeat the northern colonies of British North America and the conflict drew to a close in a virtual stalemate with neither side gaining territory. But the conflict caused much hardship and bitterness for the people on both sides of the border and in Great Britain. 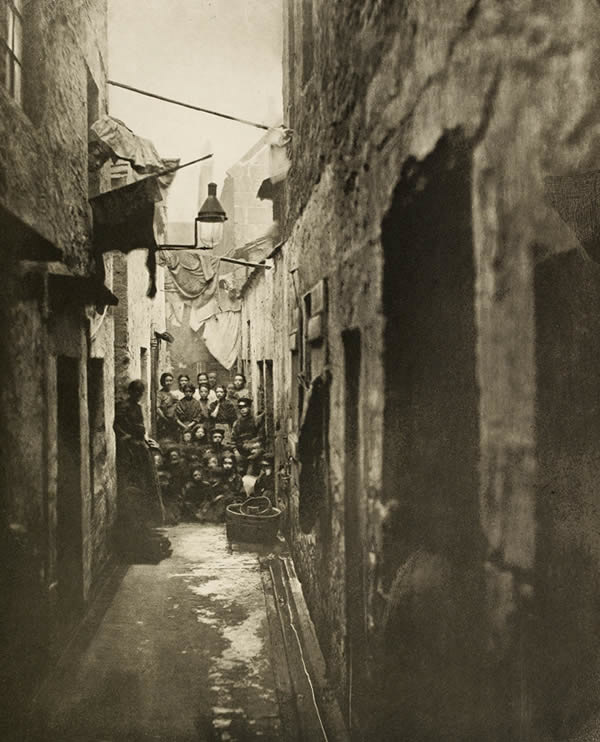 “Tenements” (Courtesy of the British Library)

At the beginning of the 19th century, farm workers in the Scottish lowlands were forced off their lands during an agricultural revolution sometimes called the Lowland Clearances. These tenant farmworkers found jobs in cities such as Glasgow where jobs in the mills were available to those who could tolerate the poverty, poor working conditions, low pay and rampant diseases. Tenements were created to house the farmers, returning soldiers from the wars and Irish immigrants.

Adding to their woes was the stiff competition from the industrial mills of Lancashire to the south. John’s father was one of those workers caught up in the technological revolution. His craft cotton weaving business fell victim to industrialization. Hugh Macdonald looked to the new colonies of British North America for new career opportunities.

It’s interesting that the famous English novelist, Charles Dickens was born just three years before Macdonald. The slum conditions in central Glasgow mirrored those of London made famous in novels such as Bleak House, Oliver Twist and Hard Times. Had he stayed in Glasgow, John A. Macdonald’s life could easily have mirrored the scenarios in Dickens’s novels.

One of the most powerful volcanic eruptions in recorded history happened on an island in Indonesia at Mount Tambora in April 1815 just three months after John A. Macdonald was born. 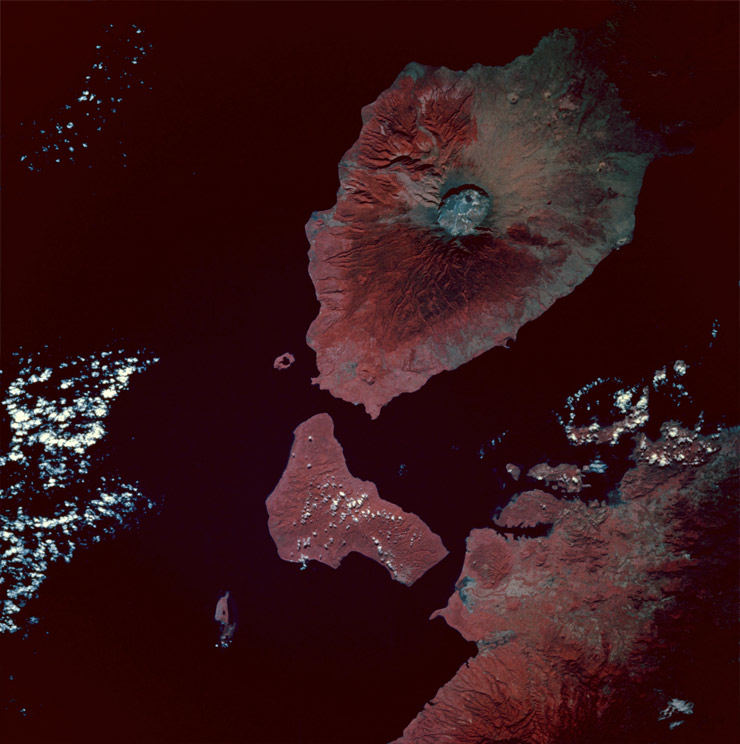 This event caused severe climate change around the world but especially in the northern hemisphere. The world was already in the midst of a cooling period known as the “Little Ice Age” so the volcanic particles that covered the earth lowered global temperatures and caused crop failure, which led to starvation worldwide. The following year became known as “The Year Without Summer.” Approximately 100,000 died in Ireland alone during this period because of starvation and disease brought on by climate change. Food riots broke out throughout Europe, especially in Switzerland and Southern Germany. Although John was only one year old and living with his family in the centre of Glasgow during this crisis, he was well protected by his loving family.

Mary Shelley began her novel Frankenstein during this time. She was sheltered in a mansion overlooking Lake Geneva with friends Lord Byron and the Dr. John Polidori. It’s not surprising that her horror classic was full of gloom and misery. Byron and Polidori also conceived the modern tale of “The Vampyre” while living with Mary Shelley.

4. The Macdonalds Joined Their Relatives in Kingston in 1820

The Macdonald family arrived in Kingston in the summer of 1820 after a long and perilous journey across the Atlantic and down the St. Lawrence River. There, they were warmly greeted by their clan relatives led by the patriarch Lieutenant-Colonel Donald Macpherson, a retired army officer. He was a well-respected veteran of several campaigns in North America including the Revolutionary Wars and the War of 1812. Macpherson assisted the Macdonalds to adjust to their new life in British North America and soon Hugh Macdonald was able to open a store. However, he had limited success in his new venture and after four years he moved the family to the farming community near Adolphustown where he hoped to benefit from the rapidly growing economy in the Quinte region.

5. To Escape Poverty and Disease

Although the Macdonalds moved to Canada to avoid harsh living conditions brought on by high unemployment, poor sanitation, violence and overcrowding in Glasgow, they found new and equally difficult challenges in the frontier world of Upper Canada.

Two years after the Macdonalds arrived in Kingston, John’s younger brother, James Shaw, was struck and killed by a drunken servant in Kingston 1822. James was only six. Altogether, John lost two and possibly three brothers by the time he was seven.

Although Upper Canada was a land of opportunity for the Macdonald family, they, like many immigrants, also found poverty and disease in the new world. 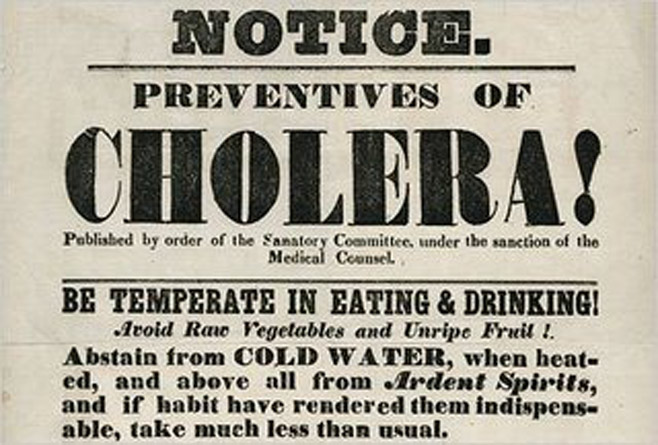 Here is a list of the other members of the family and friends who died prematurely:

When he was only fifteen, he left school and began working in a law office.  He realized that someday he would become the head of the family. Anticipating this responsibility, he devoted himself to the study of law and developed a network of friends through his volunteer work in the community. At the age of twenty, he graduated from the Law Society as an attorney and began to practice law, first in Picton then in Kingston. Several years later, when his father died, he became the principal breadwinner of the family. Throughout this time, the young John A. Macdonald grew closer to his family and friends.

His legendary work ethic and sense of humour and an occasional drink or two sustained him through his darkest hours. He began work at the age of fifteen and died at the age of seventy-six still serving as Prime Minister of Canada. His remarkable career lasted a total of sixty-one years. It is not surprising that he once said wistfully: “I had no childhood.” That may have been partially true, but he did have one of the most remarkable careers in the history of Canada.

Wilfrid Laurier, the leader of the Liberal Party of Canada, famously summed up that career when he addressed members from both sides of the House of Commons two days after Macdonald’s death on June 6, 1891:

The place of Sir John A. Macdonald in this country was so large and so absorbing that it is almost impossible to conceive that the politics of this country — the fate of this country — will continue without him. His loss overwhelms us. For my part, I say, with all truth, his loss overwhelms me, and that it also overwhelms this Parliament, as if indeed one of the institutions of the land had given way. Sir John A. Macdonald now belongs to the ages, and it can be said with certainty that the career, which has just been closed, is one of the most remarkable careers of this century … As to his statesmanship, it is written in the history of Canada. It may be said without any exaggeration whatever, that the life of Sir John Macdonald, from the time he entered Parliament, is the history of Canada.

He may not have been perfect, but he was the principal architect of Confederation and the first prime minister of the Dominion of Canada. He was the one man most responsible for the creation of the Canada we know today. That’s quite an accomplishment for the son of a cotton merchant, born amidst the tenements of inner city Glasgow during a time of catacylismic geo-political change.

Six Questions about John A. Macdonald’s Early Life and Career:

1. What two wars were close to ending when John A. Macdonald was born in Glasgow in 1815?  How did they affect his life?  What other wars have led to large numbers of people moving to Canada in a way similar to the Macdonalds?
2. What did the young Macdonald have in common with Frankenstein and Count Dracula?  Investigate the cause of this cataclysmic event.  Have other events like this caused people to move to other countries? Describe these occurrences.
3. What did the young Macdonald  have in common with Charles Dickens and his characters?  Explain.
4. How many of his brothers died by the time he was seven?  Which one was killed by a drunken servant?  How did these deaths affect his life?
5. The Macdonald family travelled to Canada in steerage on the Earl of Buckinhampshire.  John A. Macdonald: Scotsman or Canadian?   What do these conditions reveal about the income level of the Macdonalds when they left Scotland?  When your ancestors moved to Canada were they better or worse off than the Macdonalds?
6. Why did John A. Macdonald leave school when he was only fifteen? How did he succeed without a high school diploma?