How the Macdonald Project Began

On November 22, 2009, David and Marilyn Warrick, two Picton residents keenly interested in Canadian history, invited a number of friends to their house to participate in a series of what they called “Picton parlours.”  These informal get-togethers with friends were discussions about local history.  The first discussion centred on the life and achievements of Judge 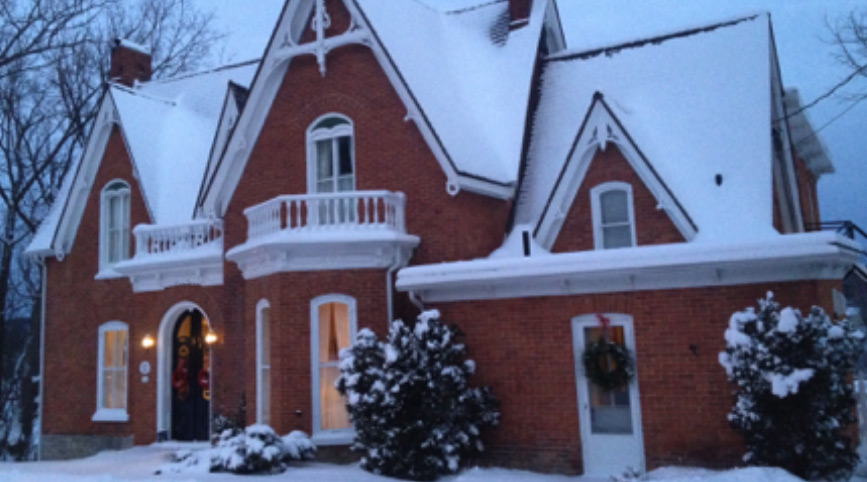 Edwards Merrill UE, the original owner of their home. Another meeting examined the passages in Samuel de Champlain’s diary that described the early French explorer’s famous passage through the Bay of Quinte on the war expedition to the home of the Oneida in 1615. The third discussion focused on the early life and career of Sir John A. Macdonald in the Quinte region. This was by far the most popular and important of the three get-togethers.

David led the discussion by retelling some of the many anecdotes about Macdonald told by biographers, local historians and newspaper columnists over the years. The stories about Macdonald’s early successes as a pro tem lawyer and his contributions to civil society in the County are not as widely known as his pranks involving friends and acquaintances. David and Marilyn had just returned from a tour of several small towns in southern Ontario where they’d seen a number of sculptures of famous people in public settings. They described George Bernard Shaw in Niagara-on-the-Lake, Ian Millar and Big Ben in Perth and Mackenzie King in Kitchener. They suggested that a sculpture of the young Macdonald could help to revitalize historic downtown Picton and generate interest in the rich history of the County. All seventeen participants supported the idea to commission a sculpture of the young John A. Macdonald for the bicentennial of the birth of Macdonald in 2015. In January 2010, an ad hoc committee was formed comprised of Marc Somerville, lawyer; Gerald Rayner, former senior public servant; Alan Gratias, retired diplomat; and David Warrick, retired professor.

The group met several times later and defined the goals, strategic plan, and fundraising activities in preparation for the Macdonald Bicentennial in 2015. After several discussions about the name, the group finally settled on the Macdonald Project of Prince Edward County. David began work on researching the story behind the project centering on Macdonald’s time in Picton as a young lawyer and his first trial before a judge and jury in the Picton Courthouse in 1834. Gerry, Alan and Marc began work on fundraising and promotional activities.

The committee believed that the introduction of this kind of public art to a popular meeting place in Picton would accomplish four goals: it would draw attention to the rich history of Prince Edward County; it would focus interest on historic architecture; it would draw attention to the importance of preservation and restoration of historic buildings; and it would help to make the public more aware of the irreparable loss created by demolitions in the community, such as the one shown here. 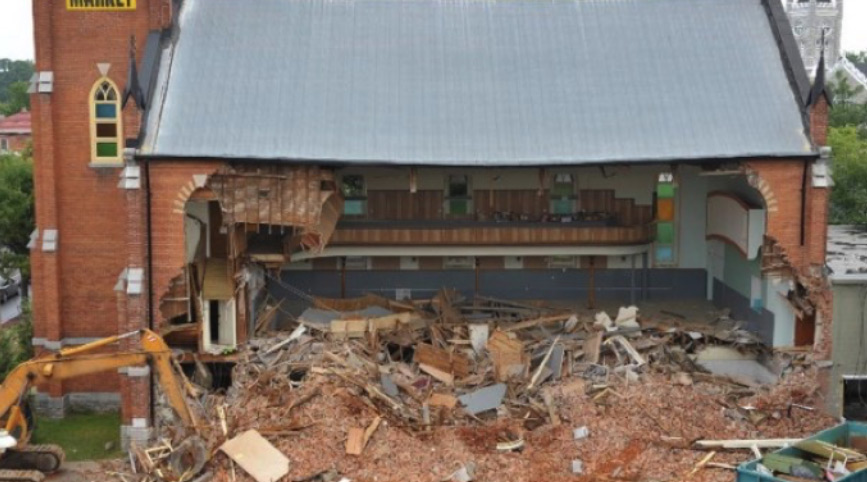 One of the first tasks of the committee was to select a suitable artist for this first sculpture of Sir John A. Macdonald as a young man.  The four-person committee began a comprehensive search of available and qualified sculptors. After several weeks, the committee was able to short-list three suitable artists. These were compared carefully based on selective criteria.

Ann Wood, a local artist, joined the committee and offered advice on graphic designs and advertising. David invited Ruth Abernethy for a visit to the County and over dinner at the Merrill House, the committee described the story behind Macdonald’s first trial. To the delight of all present, Abernethy articulated a vision of the work as an interactive portrait involving Macdonald in a courtroom scene. Macdonald would appear as a young lawyer posturing to the jury with arm raised and leaning on the dock as he presented his case.  The committee was most impressed with the concept and suggested that it be submitted as a formal proposal complete with drawing. Several days later it arrived. The committee had no hesitation in unanimously endorsing the proposal of a work to be known as John A. Macdonald Holding Court.  The Abernethy sculpture would be a courtroom scene where the public could experience history through bronze portraiture in a busy urban setting. The work would capture a moment in time when John A. Macdonald came of age and began his career in law. Visitors to Picton would enter an imaginary courtroom and witness the teenage Macdonald delivering his first speech to a judge and jury in the October Quarter Session of 1834.

In August, 2010, the committee organized a Kickoff Reception at the Red Barns of Glenora, near Macdonald’s historic home at the Stone Mills of Glenora. Approximately eighty guests came to witness a one-act play called The Highspirtied Crossing of 1848 and to offer their support for the project. Guests were introduced to artist Ruth Abernethy and Peter Hill, who performed the part of Macdonald as a young Kingston lawyer returning to the good old County. Later the organizing committee visited the historic courthouse and jail for some photographs of Peter posing as Macdonald standing beside the prisoner’s dock and addressing a jury. Peter later visited the gallows and gaol for more photographs for advertising and promotional purposes. These events marked the official beginning of the five-year project now known as the Macdonald Project. It was a successful beginning to what later became a popular and much talked about happening in the Prince Edward County. 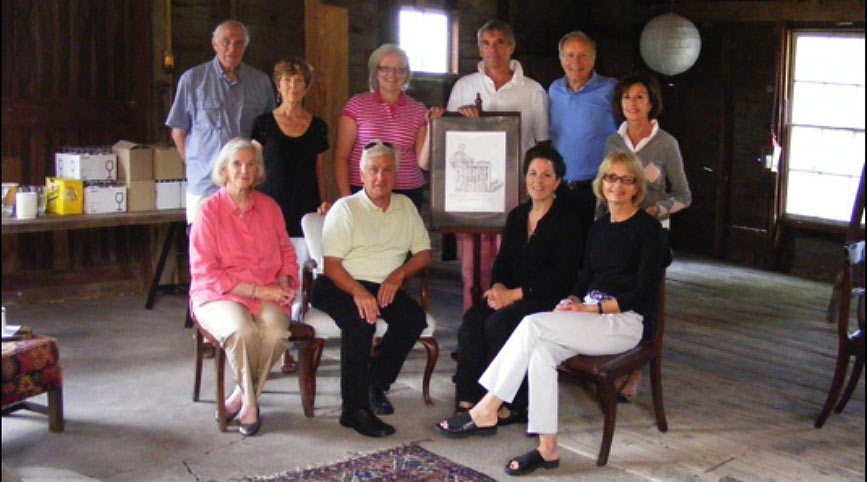 Why Commission a Sculpture of John A. Macdonald in Picton?

Sir John A. Macdonald is celebrated as the founding father of Confederation and the principal architect of Canada’s primary constitutional document: the British North America Act of 1867.  On Canada Day, 1867, Macdonald became Canada’s first prime minister of the Dominion of Canada.  As a statesman, he ranks with great world leaders including Abraham Lincoln and Benjamin Disraeli.  But in his early years he was thought of himself as a Bay of Quinte boy. He lived in the Quinte region intermittently for most of the time that his family lived there.  When he was just 18, he ran his cousin’s law office in Hallowell/Picton as a pro tem lawyer. His parents and sisters lived a stone’s throw away, operating grist and carding mills at Glenora near the famous ferry.

As a teenager, John A. practiced law while articling under the tutelage of his mentor George Mackenzie of Kingston, and later his cousin, Lowther Pennington Macpherson of Hallowell.  While in Picton, he entered fully into civic life in Picton by volunteering with the first district school board, the agricultural society and a young men’s association.  He even volunteered as the polling clerk for the 12 legislative assembly of Upper Canada in 1834.  But he also had a young man’s fondness for pranks and practical jokes. He himself was one of the first defendants brought to trial in the Picton Courthouse — still used today. After a scuffle in town with another prominent citizen over a prank, he found himself in court defending himself on a charge of assault with his co-accused.  He won that trial before a judge and jury on October 8, 1834 but his co-defendant was found guilty and fined a token six pence.  Four months later John A. Macdonald was placed on the roll of the Law Society of Upper Canada as an attorney.

So Macdonald actually began his career in law Picton in 1835 just months before he moved to Kingston to open his own law practice there.

The sculpture celebrates this moment when John A. Macdonald came of age and began his career as an attorney in Picton, Upper Canada in 1835. 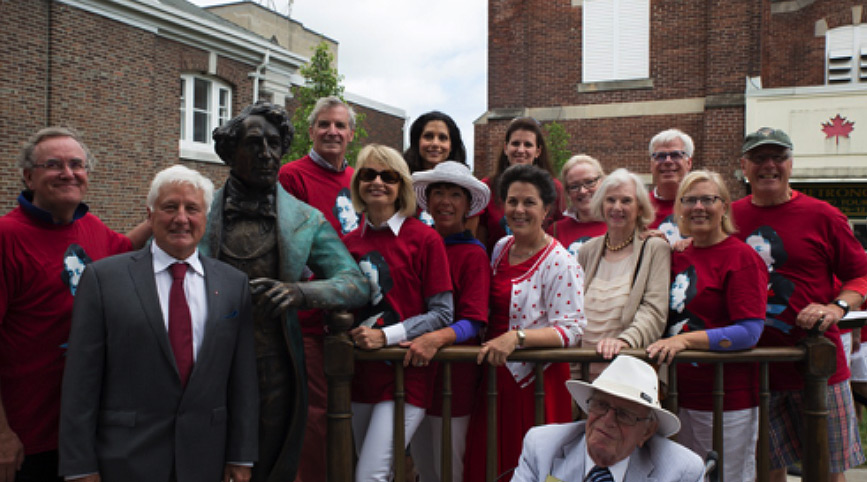 The Project was made possible with funding from the Government of Canada through the Department of Canadian Heritage, contributions from the Parrott Foundation, the Albany Club of Toronto, donations from friends of John A. Macdonald, the volunteers behind the Lazier Trial Re-enactment fundraiser, especially Justice Robert Sharpe, Justice Byers and Peter Lockyer. We sincerely thank them and everyone who has participated in the project over the last six years.

For more information about the project and the story, visit the Web site at the Macdonald Project of Prince Edward County