Overview of the Project 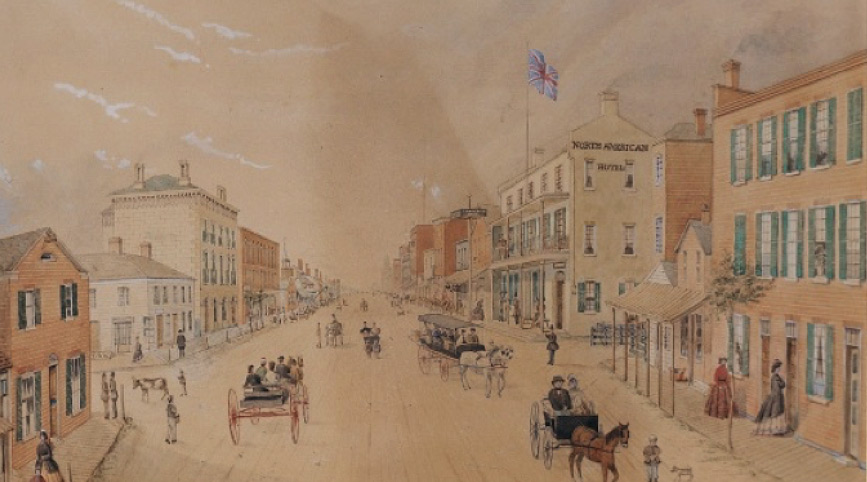 The purpose of the Macdonald Project Inauguration Ceremony is to celebrate the early life of Sir John A. Macdonald with a bronze sculpture depicting him presenting and winning his first case in the Picton Courthouse in October 1834. The life-size, interactive sculpture by Ruth Abernethy will be unveiled in historic downtown Picton on Canada Day 2015 to mark the bicentenary of the birth of Canada’s first prime minister. The story of Macdonald’s early life and career is an important part of Canada’s national story.

In several historic towns in Ontario, such as Picton and Niagara-on-the- Lake, strong business improvement associations play an important role in the economic and cultural life of these communities.  The Picton BIA and the Prince Edward County’s Economic Development Department (now Community Development Department) working with the Downtown Revitalization Committee and Streetsmarts Committee developed a strategic action plan for the redevelopment of the town that complements the goals of key stakeholders and assists the Planning Department of the County of Prince Edward to fulfill its mandate.  This cooperative approach is an important part of the redevelopment process.

In 2012, E.R.A. Archictects conducted a Heritage Conservation District Study to identify significant cultural heritage resources in the downtown and prioritize heritage issues to develop a compatible framework for future growth and development. The consultants noted that Picton’s cultural heritage resources are “a valuable asset available to enhance the downtown and help guide change as the Town continues to grow.”

The historic revitalization of Picton’s main streets has, therefore, been identified as an important part of the strategic cultural plan for Picton. The Town of Picton and the County of Prince Edward have a rich legacy of historical and cultural resources to draw from.  One of the most important of these is the considerable archival and historical resources associated with the most famous resident of Prince Edward County: the first Prime Minister of Canada, Sir John A. Macdonald.

In June 2009, a poll conducted by Ipsos Reed on behalf of the Dominion Institute revealed that  only 41% Canadians could identify Sir John A. Macdonald, Canada’s first Prime Minister, from his picture.  In an earlier poll, the Dominion Institute reported that 76 per cent of Canadians are embarrassed by the limited knowledge citizens have about their history and 80 per cent believed that a Canada-wide history curriculum for public schools would help foster a sense of national identity.  As the polls indicate, history is very important to Canadians.  Across Canada, towns, such as Picton, play a vital role in connecting Canadians with their leaders and their important legacies.

As Professor Patrice Dutil notes in his “Remembering Sir John A. means remembering who we are”:

Provincial governments must do much more to improve the teaching of history. Currently, only four provinces require high school students to take a Canadian history course in order to graduate (Ontario, Quebec, Manitoba and Nova Scotia).  http://www.ipolitics.ca/2015/02/06/remembering-sir-john-a-means-remembering-who-we-are/

It is with these issues in mind that the project to commission a bronze statue of John A. Macdonald outlined below is presented as a means of connecting Canadians with their past and in so doing help to advance Picton’s cultural and economic revitalization.

Also see this article from the Kiingston Whig Standard: